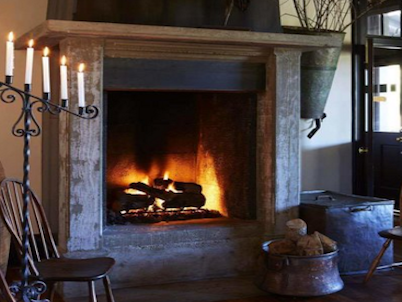 Check In: The Olema

There aren’t many hotel options on the Point Reyes Peninsula, Northern California’s national seashore, but in September 2015, West Marin County welcomed back one more: The Olema. Built in 1876, the historic property had operated as an inn (upstairs) and a restaurant (downstairs) for most of its existence, but when its new owners, Margaret Grade and Daniel DeLong, took over in 2013, they painted the fusty bright-white Victorian a gloomy shade of gray (to much local controversy) and reopened only the restaurant, named Sir and Star. It was a sequel, in a way, to their celebrated first: Manka’s Inverness Lodge, a pioneering local spot secluded in the woods and beloved by food lovers and luminaries alike, before it burned down in an electrical fire a decade ago. Now, the Olema once again operates as a proper inn, with five renovated rooms — each done in Ms. Grade’s unique style.

Just about every backpacker, birder and oyster-slurper bound for Point Reyes National Seashore passes through the unincorporated town of Olema, and therefore by its namesake inn at the intersection of Sir Francis Drake Boulevard and Highway 1.

Spare but sophisticated, the inn’s rooms are tucked down a short hall dimly lit by sconces. Each room is decorated differently, some with wrought-iron bed frames and footstools, free-standing wardrobes and framed etchings of fowl — all scavenged by Ms. Grade from Parisian flea markets or her personal coffers. Rustic black, wide-planked floors are made from repurposed wood, and long black shutters help keep the otherwise drafty rooms warm. Eye masks and earplugs are set on every pillow, in case you’d rather not fall asleep to owl hoots and the faint jazz coming from the restaurant downstairs — or, for that matter, wake to the dairy trucks rumbling by below.

It’s called the “W.C.,” as emblazoned on the door’s clouded glass. Clean, with classic white tile, Kiehl’s products and a vintage toothbrush holder too small for today’s bulbous handles, there is nothing especially noteworthy about this water closet — other than the fact that, despite California’s drought, the hot water took so long to warm up I worried that my shower, in a basic tub, might have to be cold. (It wasn’t.)

Years before the notion of “local” took root in the culinary world, Ms. Grade and Mr. DeLong cooked exclusively with ingredients gathered from within miles of their restaurant, Manka’s. (All that remains now are a few guest cabins.) Today, Sir and Star is an intimate restaurant adorned with antlers, stuffed cormorants and candelabras. It’s a fitting scene for feasting on rustic, memorable dishes like “Leg of a Neighbor’s Duck,” as worded on the whimsical menu — typically written mere minutes before 5 p.m. service begins.

No bicycles or hot tubs or even bathrobes, but the Olema does boast a romantic foyer with a seven-foot-high fireplace and pair of deep chairs, perfect for sharing a bottle of syrah by the local winemaker Sean Thackrey.

If my room — though comfy and calming and affordable — was not a creaky flight of stairs above Sir and Star restaurant, I might wonder: What’s the point? (As Point Reyes has many cozy cabins available to rent.) But how wonderful it is, to enjoy such a fine supper in the countryside — without having to drive the winding road home.