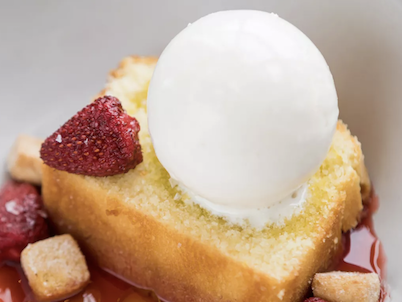 Gwyneth Paltrow doesn’t come here often, but she came here once — on the heels of Anderson Cooper, no less. And once, within weeks of opening, by two separate super-celebrities, was enough: enough to garner more than 83,000 Instagram likes between them; enough to book every online reservation for at least a month; and enough to create such a frenzy that on a recent Thursday night at 6 p.m., a friend walked up the flight of terra-cotta-tiled stairs to the host stand and was quoted a — wait for it — four-hour wait.

Which is why we showed up at 5:22 p.m. on a Tuesday, eight minutes before opening, to join the lineup of actually fashionably dressed San Franciscans hoping to score one of the 46 spots generously reserved for walk-ins at the zinc-topped bar, or window ledge, or communal table. Little Star, next door, shooing people away from its entrance, wasn’t asthrilled about the swarm as the squealing women snapping so-excited-to-be-here! selfies beneath Che Fico’s sign.

It’s the flashiest addition yet to the ever-gentrifying Divisadero Corridor, a bulb-lit arrow pointing to what the city’s latest crop of restaurants has been missing: a new classic. A place that both fits right in — and stands out. Che Fico has taken what we know and love about pizza and pasta and San Francisco and given it a jolt.

It might’ve taken almost four years to come to fruition, but — like the wait for a table — it’s worth it.

Inside is one of the most stunning, if intentionally photogenic, restaurants in San Francisco. It’s like Oakland-based designer Jon de la Cruz took the Insta-success of the lone wallpapered wall at Leo’s Oyster Bar and went nuts — well, figs — plastering the place with whimsical illustrations of leafy trees hanging with the plump, fuschia fruit. Mismatched with burnt-orange, black, and white floor tile, it creates a dizzying, almost Escher-like entrance that opens to a space so lovely — and unexpected in this city of lookalikes — that I literally gasped.

There are vintage-styled leather booths mixed with stained maple tables, a long marble countertop backed by a bright-red pizza oven from Italy, and a seemingly never-ending communal table fashioned from a 200-year-old felled oak. It is light and lofty, and inoffensively large. That size, and the rustic wooden rafters (festooned with bushels of sun-dried espelette peppers), are the only signifiers of the location’s former life as an auto-repair shop.

Rarely does a restaurant with so much hype actually live up to it. But from the first sip of my Coriander to the last scrape of olive oil cake through its puddle of roasted strawberry vinaigrette, I was a believer. The cocktail is casually elegant, garnished with a white blossom; it smells like a garden and tastes like gin — citrusy gin with coriander-infused curacao and housemade herbes de Provence bitters. And the fat slice of cake is as light and fluffy and life-changing as fresh snow on a Utah slope, adorned with a heavenly globe of malted yogurt gelato.

And then there’s everything in between: antipasti and pastas and “peasant comfort” fare, wood-fired chicken and the crusty, eye-catching Parmesan-dusted pizzas that I passed up on my first visit to leave room for the lamb loin. Hailing from Sonoma County, it’s aged for 17 days, marinated for two, then slow-roasted on the wood fire and topped by a shrub of wild watercress. Thick, meaty medallions fanned across the plate, fat blissfully intact. It’s a hefty, yet tender, undertaking for two.

The albacore tuna conserva is the antithesis: delicate, with too few hunks of tuna. But with wisps of radish and wedges of artichoke, it’s a wonder: tuna from Baja that’s been cured and Cryovac’d in olive oil and slow-poached before it arrives drizzled with aioli. It is fleshy and light, more silky than fishy, and blows away anything served from a jar.

Meanwhile, the pasta blew my mind. Not an easy feat in a town where house-made tagliatelle has become almost as ubiquitous as burritos. Each dish is marked with a little bubble on the menu as fatta a macchina in casa (made with an in-house pasta machine) or fatta a mano (made by hand). The orecchiette with broccoli rabe and fennel sausage sounded so standard I almost skipped it, but that would’ve been a serious mistake. The chewy, thick thimbles, tossed in goat butter, trumped every other orecchiette I’ve tried. Another big hit was the bigoli nero, a bowl of delightfully dense squid-ink noodles tangled with octopus and Dungeness crab and littlenecks, scattered with the crunch of toasted breadcrumbs. Only the mafaldini — squiggle-edged lasagna-like lemony noodles in a bland fava-leaf pesto — was a miss. But in the lumache — snail-shaped shells clinging with a pomodoro sauce burning with ’nduja and chiles — I found true love.

And in the box on the menu labeled “Cucina Ebraica,” I found my roots. Sort of. Chef David Nayfeld’s NorCal version of the Jewish-Italian tradition was clearly not mine. In 1980s suburban Boston, where I was raised, that meant Friday night platters of chicken parm with gloppy ziti from a red-sauce palace off Route 9 called Marconi’s.

But, here, off Divisadero Street in 2018 San Francisco, Jewish-Italian cuisine includes locally sourced gizzards and chicken hearts and corned beef tongue. The duck liver is grilled over the wood fire, chopped, and mixed with a chicken-liver mousse. It is creamy and dreamy and something you’d think chopped liver, by its very nature, could never be: pretty. A velvety mound ringed like a hippie chick in petals of purple daikon and pickled onion, it came flanked by a single, seed-studded slab of Roman matzo that, if boxed, would put Manischewitz out of business. (Even if Nayfeld does use a reduction of its sweet wine to make the liver.) There was more liver than matzo, which was a little irritating, until I remembered I still had my fork. A chopped liver that stands on its own is a chopped liver worthy of celebration.

Ultimately, it’s neither Instagram nor Anderson Cooper (nor his viral post of the pineapple-red onion-fermented chile pizza, the crust of which I actually found to be too stiff, and one of the menu’s only disappointments) that is responsible for rocketing this restaurant to the top of San Francisco’s food chain. It’s the food and the drinks and the desserts. Not to mention the industry rock stars behind it: Nayfeld and his fellow Eleven Madison Park alum and Beard-winning pastry chef Angela Pinkerton — aided by co-owner Matthew Brewer and bar director Christopher Longoria, who are also ones to watch. Plus a staff that was so attentive, it at times felt stifling. They were peeking out from behind the fig trees, re-pouring water glasses still three-quarters full, and repeatedly asking “May I take that away?” a tad too soon.

Still, collectively, they have created a restaurant that feels unique and exciting and of the moment, like Delfina did two decades ago, like its neighbor Nopa did 10. And if we can peer into San Francisco’s pasta- and wood-fired chicken-tangled future — it also feels like almost-40-year-old Zuni does today: timeless.