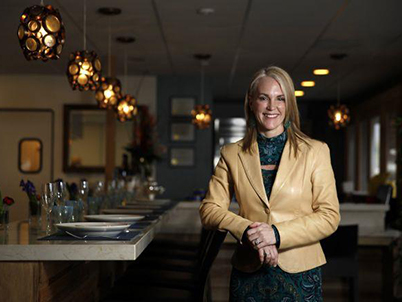 At first glance — with her platinum hair, humongous diamond rings and wrinkle-free skin — Deborah Keane looks like your stereotypical wealthy California mom. Then she starts talking. Riffing between thick Boston and Russian accents. Tossing out retro, un-PC terms like a true Irish Masshole from the ’80s. Sharing stories about being “shaken down” by mobster-like men and high-heeling around fish farms for E! TV. That’s when you realize that Keane is not a lady who lunches.

Rather, she is the self-proclaimed “Caviar Queen” running the only female-owned and -operated caviar company in the world — in an industry long dominated, she says, “by mostly big, scary-looking, 60-year-old Russian guys.”

Keane launched California Caviar, which sells domestic and imported farm-raised fish eggs, in December 2007. “At the best possible time,” she says with a smirk. Right before the economy plummeted? “Yup. I had nowhere to go but up.”

And up. Today, California Caviar sells several million dollars’ worth of farmed caviar annually, works with acclaimed chefs like Jacques Pépin, Jose Garces and Daniel Patterson, and in March opened the first “caviar tasting room” at the company’s headquarters in Sausalito — where you can slurp a dozen or so types of sturgeon eggs — by the gram — off the back of your hand. Or, if you want to get fancy, a mother-of-pearl plate (though many — like the Spandex-clad cyclist who rolled in the other day — don’t).

Called Vivace, the Siberian baerii sturgeon caviar is produced in Germany using a technique patented by marine biologist Angela Köhler. She has perfected a process that’s been the holy grail for sturgeon breeders and caviar producers: making great caviar without killing the fish.

It involves massaging mature eggs out of the sturgeon, then rinsing them with a simple concentration that allows the eggs to maintain their natural state before being salted and packed like conventional caviar. Besides the obvious benefit of not killing the fish, Köhler’s process means a sturgeon’s eggs can be harvested repeatedly — every couple of years instead of just once in what would otherwise be the fish’s 60- to 120-year life span.

At $125 to $135 per ounce, Vivace isn’t cheaper than conventional caviar (yet). But it is sustainable and cruelty-free — and it seems to be passing the critical taste test.

“It has an amazing mouthfeel and pop, with a nice salinity and finish,” says Peter Armellino, chef of the Michelin-starred Plumed Horse in Saratoga, Calif. Others, like Sterling Caviar’s managing director Shaoching Bishop, applaud the no-kill factor but aren’t yet sold on the texture.

Keane describes Vivace as clean and mild, with the “Caspian pop” of wild-caught turgeon caviar, which we haven’t legally enjoyed since 2011, when wild caviar was officially banned due to depleting stocks.

As farmed caviar has risen in quality and quantity over the last decade — a wave Keane wisely caught — it’s turned into a global, multimillion-dollar industry. And now, with Köhler’s Vivace to sell, she has the potential to help shift Americans’ perception of caviar from elitist luxury to, as she puts it, “everyday indulgence.” Brioche and caviar: the new bagels and lox?

Raised in Foxboro, Mass., by a high school English teacher and a “football-obsessed” engineer, Keane grew up eating hot dogs at the Patriots’ stadium. “There was no caviar in our house,” laughs the woman who now zips around in clients’ private jets and yachts — and plays it up for reality shows like Buying for Billionaires.

After graduating from Northeastern, Keane became a pediatric neonatal nurse practitioner. “I had no life,” she says. “Eventually, I realized I wanted one.” So she landed a job at a luxury lifestyle publication and went from caring for sick babies to selling ads for cashmere.

In 2004, while at a San Francisco fundraiser, she reached for the same crab-leg canapé as an investor in Tsar Nicoulai, pioneers of farmed caviar — and within weeks had a job selling sturgeon eggs.

“I knew absolutely nothing about the industry,” she confesses. But she jumped right in — literally donning waders and heading into the tanks. “When I sell something, I will eat it. Sleep it. I have to touch the fish. … I have to make the caviar,” she says. “I have to love it.”

Only she didn’t. “It was horrible,” she recalls. “It tasted like the inside of a fish tank. I said, ’I can’t sell this.’” So she learned everything she could about caviar — and discovered she had a unique palate for it. “Must’ve been my Boston meat-and-potatoes diet.”

Her supertaster skills came in handy when dealers tested her early on. “I was (a) new to the industry, and (b) a woman,” she recalls. “It happened all the time: They’d put the good caviar on top, shitty caviar at the bottom. … Or try to sell me dyed whitefish when I asked for hackleback. I’d call them up, and say, ‘Nice dyed whitefish, jackass.’”

Things occasionally got scary, says Keane. She was once shaken down by dealers demanding money they weren’t owed, and she narrowly avoided starting a caviar company with a dodgy character who was eventually indicted. Distraught over what to do next, she rang Jacques Pépin, one of her clients at Tsar. “I said, ‘I’m unemployable! I don’t want to work for anybody,’ he said, ‘Good, let’s press caviar together.’” Bolstered by a big-name chef, California Caviar Company had its first custom product.

Seven years later, Keane is on the cusp of ushering in a new era for what’s always been an extravagance. One in which cyclists can sidle up to the bar for their daily dose of omega-3s, and a premium product — with double the shelf life of conventional caviar — could be stocked by Safeway.

“Caviar is today where the wine world was 40 years ago,” says the mother of two, who even packs the stuff in her kids’ lunchboxes. “Americans used to drink wine only on special occasions. Now we drink it every day.” She laughs. “Or at least I do.”

Richard Adams Carey, author of The Philosopher Fish: Sturgeon, Caviar, and the Geography of Desire, agrees that the industry is undergoing a major shift. “This is a really interesting development, this Vivace thing. I heard of a previous attempt in Russia that didn’t pass the taste test. … If this one manages that trick, it could potentially become much cheaper to produce caviar,” he says. “And what happens to the mystique of the food, once it’s as ordinary as a bagel?”