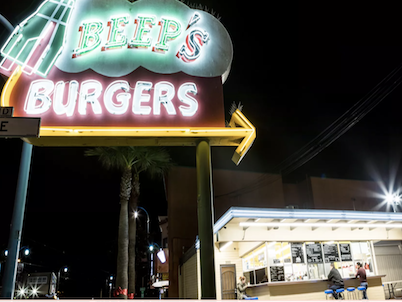 Later I learned that the rocket ship was actually a satellite, a remnant of the Space Race days, when I guess all Sputnik really did up there was beep. It must’ve seemed like a good name, back in 1962, for a drive-in.

Fifty-five years later, having scored a prime parking spot, I questioned the drive-in concept on the whole. Scarfing down food from the front seat is a barbaric practice that should be reserved for those times when you’re running late to work or, say, trying to outrun Tahoe traffic. I suppose if they had servers roller-skating around and I were parked down the street and it were raining, I could see the appeal.

Instead, on a recent sunny Saturday afternoon, we stood behind just two people (you can’t call that a line in this town) and placed our over-order with a nice woman behind the window. Then we grabbed a couple of free stools capped with squeaky-clean, bright-blue, Pepsi-branded cushions, and waited for our name to be called over the muffled loudspeaker — a throwback I didn’t realized I missed until I heard it.

No hand-held vibrating buzzers. No hordes of tourists. No Ferry Building prices. There’s no Trumer pilsner or Turley zinfandel either, but that’s okay; Beep’s is more of a Cherry Pepsi-Orange Crush kind of place. And ever since 30-year-old Samantha Wong took it over in 2014, it’s become a Cherry Pepsi-Orange Crush kind of place with food fit for discerning San Francisco eaters who’d never deign to drink the stuff. Myself included. (A Twinkie milkshake and jalapeno poppers, however, I was totally up for.)

Biting into the thick, deep-fried crust to find oozy-hot cream cheese hiding a fat hunk of jalapeno was a thoroughly satisfying, and, for once, non-tongue-burning experience. As it turned out, sucking bits of blended Twinkie through a straw wasn’t as fun as it sounded. But apparently it’s a hit with the college crowd. No matter: The Nutella and the Oreo milkshakes, the latter made with Oreos crushed on the spot, were thick, kitsch, and delish. At $4.95 apiece for the 16 ounce, they together cost less than one at Cole Valley’s Ice Cream Bar.

What I really loved, though, were the onion rings: hearty, steak-cut, almost greaseless loops with a clean crunch and slippery, flavorful insides. The curly fries, too, were firm and seasoned and all I wanted them to be. Even the sweet potato fries, so frequently mush, had that perfect snap. The only disappointment in the fry department were the plain ones, which were not as crisp or golden or salty as they could be. Nothing to rant on Yelp about, but nothing to come back craving either.

My burger, however, I’d trek out to Ingleside for anytime: an all Angus beef quarter-pound patty, with Beep’s secret sauce (a mix of mayo, ketchup, paprika, and cayenne that could’ve used more kick), leafy lettuce, and melted cheddar on a soft Semifreddi’s bun. Juicy, messy, hand-shaped Niman Ranch beef, it was a $7 feat in a city where burgers now push $20.

In June, Beep’s was declared a San Francisco Legacy Business, joining beloved institutions like Casa Sanchez and Tommaso’s. A dinosaur, however, it’s not. What’s driving Beep’s today is Wong’s commitment to preserving the past, while serving the present. She shed what didn’t work (a confusing mix of teriyaki rice plates, tacos, watery pineapple shakes, and shoddy ingredients) and enhanced what did.

“They’ve definitely upped their game,” said a dad in a tweed cap, with his tweenage son just out of the SSATs and diving into a half-pound double.

He comes for the crispy chicken sandwich. (I also had it, and it was a winner: succulent breast meat coated in a thick crust, with a fresh, lively jalapeno-parsley-red onion slaw.) The kid pointed to the Whole Foods and the spate of new condos and the Philz Coffee across the street. “None of that was here before,” he said. “It was just us.”

And now it was me. And the hipster dad and son. And a college couple, totally intertwined. And two pairs of stressed-out parents attempting to corral toddlers covered in ketchup. And a trio of 20-something dudes with slicked hair, wearing Vans and white tees, looking appropriate for the time warp where they were lunching. “I just discovered this place two months ago,” one of them told me. “And now I’m, like, here every day.”

There was also a nerdy high school student patiently waiting, with a McDonald’s bag, for his Beep’s Burger. “I like McDonald’s nuggets better,” he explained. I agreed.

True to its name, Beep’s is for burgers, with grilled onions or mushrooms, fresh avocado or fried egg, if you like. As well as mini-corndogs and breakfast sandwiches served all day, and wafer cones of vanilla-chocolate swirl that cost less than a ride on the K Line.

Beep’s is a worthy reminder that every meal in this town doesn’t have to be epic or expensive or — gasp — organic. Or consumed in a leafy parklet built by a local craftsman with reclaimed wood, for that matter. Sometimes, even in San Francisco, it’s enough to just sit outside, on a Pepsi stool at a non-descript counter, and enjoy an admirable, below-market-price burger, mere inches from a row of parked cars that includes more beaters than Beamers — looking up at a neon-lit sign that, propped up by the next generation, has stood longer than anyone eating beneath it.