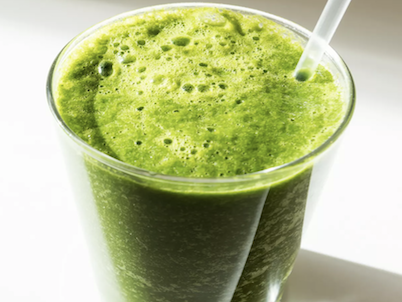 A Glutton’s Report from the Gluten-Free Frontlines

For an omnivorous, carb-craving, cocktail-swilling, relatively new restaurant critic still getting accustomed to her intake, spending dawn to dusk at As Quoted, an allergy-friendly, all-day cafe in Presidio Heights, was like checking into a one-day detox center. Or at least the “spa cafe” of a refined resort.

Fresh off an especially indulgent stint that included ham-centric holiday parties and Harbison Cellar cheeseboards, platters of ribs and baskets of jalapeno poppers, I — like so many San Franciscans — decided I needed a cleanse of sorts, but just a quickie, as I’m not really the cleanse type. (I once tried a juice fast and quickly realized two things: Liquid kale makes me queasy, and I prefer to chew my food.)

For this first review of the new year, a glutton’s notes from the gluten-free frontlines:

Overheard: “Hiiiii! How are you? Are you working these days?”

Order: I decided to stray from my regular morning ritual and kick things off as one is supposed to at As Quoted: with an organic turmeric latte, infused with fresh ginger, almond milk, coconut oil, sea salt, and coconut sugar. But then I asked the perky woman behind the counter, “That includes espresso, though, too, right?” She smiled. No. And so I reverted back to my latte, made with Andytown beans and real milk. (The only cow milk item on the menu.)

Adequately caffeinated and settling into the As Quoted spirit, I decided to give the turmeric latte a try. And it was a pleasant surprise. As I sipped the steaming, spicy, coconut creamy, curry-yellow concoction, I felt my skin glow, noticed my stress dissipate, and instantly anti-inflamed. Kidding. Still, Gwyneth, who’s popularized the benefits of the almighty turmeric latte, might be onto something. (As Ayurvedic practitioners, who have been using turmeric for centuries, were before her.) Even if, for me, that something is only an occasional non-caffeinated hiatus from espresso.

For breakfast, I was flummoxed, too. The brief list of options sounded perfect for my health-focused mission: an open-faced organic almond butter-banana-honey-cinnamon sandwich; avocado toast, of course; and poached eggs over frisee drizzled with a shallot-Champagne vinaigrette (hold the pasture-raised bacon). Except, wait a minute. “Do I have to get it on gluten-free bread?” I asked, fully expecting a gluten-free cafe to offer real bread for those who want it.

“Uh, yes,” said the nice woman, giving me a look that said, Duh. “Everything here is gluten free.”

And so, after years of eschewing it, I experienced My First Gluten-Free Toast. And you know what? Baked daily with sorghum and multigrain flours, honey, eggs, and avocado oil, it was hearty without being too heavy, and not bad! It was made better, of course, because it came smothered in super-fresh avocado, thinly sliced radish, a swath of “Just” mayo (a mix of yellow split pea, lemon, and canola oil), and a sprinkle of red pepper flakes and Jacobson sea salt.

It came accompanied by a ready-to-go “honey-bruleed” grapefruit, complete with a sticky, shatter-worthy sheen, more Jacobsen’s salt, and a dash of cayenne. I realized I could, and should, eat this grapefruit every morning. (Although five bucks almost seems like a fair price for having someone else segment and sweeten your grapefruit for you, I’d probably be better off eating it at home.)

Overheard: [Married woman to single man] “Can I set you up with my friend?”

Order: Salad expectations are high at a health-minded place like As Quoted. And my “Chinese Chicken” rose to the occasion: a simple, heaping pile of crisp romaine and cabbage chopped and scattered with scallions, black sesame seeds, and cilantro in a clean, subtle sesame dressing. It came with a single, sprawling sheet of rice noodles that I broke to spread its sweet crunch. Was the salad worth $15? I’m not convinced, but I thoroughly enjoyed every bite.

Overheard: “My friend launched his startup with only $12 million in funding.”

Order: A cup of the seasonal/local/organic/andwholesome! (S.L.O.W™) bone broth soup of the day. It was spicy chicken vegetable — although I only spotted three teeny slivers of chicken, so it might as well have been veggie soup. Regardless, it was a deeply rich Marin Sun Farms bone broth with cayenne, cumin, broccoli, and an organic mirepoix. It was soothing and satisfying and I felt invigorated just sipping it (if also a little like a white-collar inmate who’d convinced Martha Stewart to cook for her; the $6 portion was small, and served on a spare white tray with a half-slice of multigrain gluten-free bread). Unadorned, it wasn’t as tasty as it had been earlier, but dipped in that broth it did its job.

Scene: Still here. It was just me; a solo dude; and about a dozen single red roses, one on every white table, each poised in a glass bud vase. (If I weren’t married, and this guy were my type, and we were both vegan, this could’ve had the makings of a New York Times Vows piece.)

Overheard: “Cruisin” by D’Angelo, coming out of the ceiling.

Order: “Is the zucchini pappardelle hot?” I asked the nice woman, already knowing the answer.

Yes, she replied. I tacked on a glass of earthy Spanish red. If As Quoted served wine, then even on my 10-hour cleanse I considered it kosher. Plus, it enhanced my vegan pappardelle: wide, paper-thin ribbons of zucchini that were silky and slippery in a sprightly green goddess sauce, effusing fresh basil and strewn with cherry tomatoes and crushed red pepper. It was a tangle that proved more flavorful and satisfying than it first looked.

The same could be said of As Quoted itself. Customers come in daily, sometimes twice a day, jonesing for its kale-romaine-cucumber smoothie, its Moofy muffin (brown rice flour, rice milk, avocado oil, banana), its Muff-Tata (eggs, spinach, garlic, basil), happy to have an eatery where they’re the majority, not an inconvenience. More and more people are anti-gluten and -dairy, -nuts, and -soy, and sisters Kara and Andie Yamagami opened this cafe, in 2016, for them. Digging into my zucchini pappardelle, though, I realized I don’t have to be one of them to enjoy it.

I admit, I often dismiss places like As Quoted and its ilk. If you eat everything, why go somewhere so restrictive? But my meals offered a glimpse into the Goopy, gluten-free lifestyle I’ve long ignored. It’s not my lifestyle, but spending the day at As Quoted, writing, eating, eavesdropping — and refilling my glass of fizzy water for free — left me, I’ll admit, feeling good. Better than I felt after my last review meal, as much as I’d loved it. It also left me feeling something I’ve rarely felt since starting this critic gig: hungry.

Overheard: “What do you want for dinner?”

“I already ate,” I replied, tearing into a loaf of Acme’s olive bread.