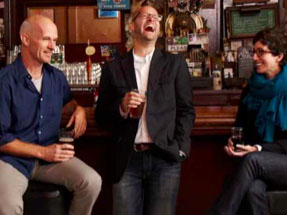 A Rabbi, a Pastor, and a Zen Monk Walk into a Bar…

…and agree that famously secular San Francisco is having a religious awakening. A divine conversation—with drinks.

What brought you to  San Francisco?

Rabbi Noa Kushner: I know it sounds clichéd, but it was an act of faith. San Francisco embraces experimenta- tion. I knew that if I tried out the Kitchen in other parts of the country, it probably wouldn’t fly. But here we have this very experimental culture, this prototype culture. Pastor Aaron Monts: For me, it was definitely a calling. I’m a Cubs fan, from Chicago. I came for a Giants game 10 years ago, and it was an amazing experience. Six years later, I moved here. Reverend Shundo David Haye: I was a sound engineer in London and read about the bicycle coalition’s annual party in the Bay Guardian, and I thought, “That’d be fun—I’ll go talk to some people about bikes.” Instead, I met a woman who lived at the S.F. Zen Center. She became my wife.

The city has not always been on the friendliest terms with organized religion, particularly the Catholic church. Were you wary of starting something religious here?

Kushner: San Francisco is actually one of the most religious towns I know. In our first year, we already have a mailing list of 600-plus. Hundreds of people attended our High Holiday services this fall. And we didn’t make it easy for them—we couldn’t hold services at our regular space at Friends School, so we did them at the Fort Mason General’s Residence. Which meant people had to climb 50 steps to get there! I continue to be blown by how much people seem to be aching for community. Haye: The tape recorder isn’t capturing all of our heads nodding. At our first meeting, we were expecting maybe 10 people to show up. But we had 25, then 30, 4o, 50. The room was overflowing.

Who would you say is your congregation?

Haye: We get all sorts, in their 20s, 30s, a lot of tech-types looking to turn off the noise. They’re ambitious and under the constant stress of a startup, but inside they have something else going on. They come here to express that. Monts: We’ve been called a “hipster church” before. But that’s not really us. We have some people who grew up going to church or who were disenfranchised by the church, but also a lot of people who’ve never set foot in a church before. Our community is the most diverse I’ve ever seen, not just ethnically and racially, but socioeconomically. We have people who’ve sold their startups and people living in SROs. We’re kind of like a mini, more intimate Glide, but without the choir. We do have a banjo, though! Kushner: We get the farmers’ market crowd—a little yoga, a little LGBT, a little bohemian. Maybe they were going to Pizzeria Delfina before, and now they’re going to Shabbat and then to pizza. Monts: We get a lot of young people who heard about us through friends and thought, “Hey, that sounds cool.” We actually lack elders. I wish we had 70-, 80-, 90-year-olds to share their life experience. Haye: Come over to the Zen Center. We’ve got a lot of old people. Our former abbotess is 86. She’s amazing.

How does your approach break from tradition?

Haye: Buddhism is a very formal organization, and it can be austere and forbidding for newcomers. But part of our mission as Zen monks is to spread the dharma. So with YUZ, we wanted to break down the barriers and present the content in a more accessible way. Kushner: We don’t want to water down the content either—but we want to present it without the typical trappings that surround religion, without the formalities.

Noa, did you come up with the name “the Kitchen” to capitalize on the city’s  food obsession?

Kushner: No, that was just lucky. The idea of the kitchen was that, well, almost everyone has one. (In New York City, we might not be able to say that!) The kitchen is the room where everyone wants to be, where everyone gathers—where it all goes down. Haye: Kitchens are pretty central to Tassajara as well: we’ve been called a food cult before, and food preparation is considered part of the practice. Potlucks have become a big thing with YUZ; hikes, picnics, movie nights—it’s become a social outlet.

Your organizations are basically startups—but without VC backing. How do you make it work?

Monts: Yeah, Ikon did actually have a few “angel investors.” But 70 percent of our operating income comes from weekly offerings. Kushner: No way! We’re not allowed to handle money on Shabbat. We can’t pass a basket. Haye: We have a unique financial situation. Tassajara [which doubles as a summer resort] is basically a cash cow for us, and we also have Greens Restaurant. Monts: I have to do it, but I’m not equipped to run the business side of the church. I don’t have an MBA—I went to Bible school! Kushner: The Kitchen is as risky as any startup. We have some grants, which help, and we charge membership fees—we have to pay our teachers. But I’d love to see a venture capitalist invest in a religious organization! The payoff won’t come in money, but I’d love to meet a VC who sees payoff in a spiritual light. I see it every day.