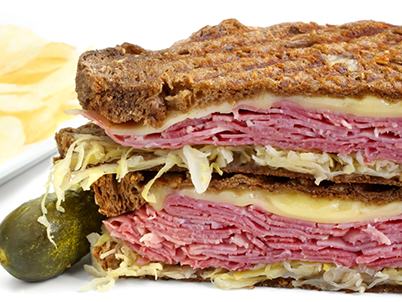 Notes from the first-ever Deli Summit

Noah and Rae Bernamoff’s The Mile End Cookbook: From Hash to Hamantaschen, which came out earlier this month, contains more than 100 recipes from the couple’s 430-square-foot messiah of a smokehouse in Brooklyn, the Mile End Delicatessen. The Bernamoffs had a few fellow “geniuses” contribute to the book, too, with full-page black-and-white photographs and unpolished prose. Bob McClure of McClure’s Pickles lists “Seven Things I Love About Pickles.” Joel Bukiewicz, of Cut Brooklyn, explains “How To Love Your Knife so It Will Love You Back.” And Ken Gordon of Kenny & Zuke’s Delicatessen, in Portland, Ore., gives the all-important “Ode to Pastrami.”

“It was quite an honor,” says the Queens-born cook, who smokes 2,000 pounds a week of the stuff and recently opened a new late-night spot that serves a $12.95 “Jewcuterie board” and a daiquiri containing loganberry Manischewitz and aged rum. “I’m actually 40 pounds lighter now than I was in that photo,” he says, referring somewhat remorsefully to his headshot in The Mile End Cookbook. “Got diagnosed with Type 2 diabetes and had to cut back.” (Job hazard.)

Noah and Ken met up last summer, at a JCC in Berkeley, Calif., to discuss the future of pastrami-on-rye, at the first-ever Deli Summit. Joined by the other cool deli kids—Evan Bloom and Leo Beckerman of San Francisco’s wildly popular Wise Sons, and hosts Peter Levitt and Karen Adelman, co-owners of Saul’s Deli, down the street—it was a meet-and-greet of the self-anointed New Guard: deli artisans who brine/pickle/cure/smoke/hand-slice their-own-everything; serve only humanely raised, hormone-free meat; and could care less about kosher.

“It was kind of an exclusive invite,” explained 5-foot-3 Karen, in baggy khakis and a black blouse, standing excitedly in the lobby before the crowds formed.* “People asked me, ‘Why isn’t Katz’s coming?’ ” She shrugged. “Old guard.”

“I get crap from those guys all the time,” said a blasé Noah, with his wife, Rae, by his side, clad in his-and-hers hipster glasses, square and cat-eye, respectively. “They’re, like, ‘What’s he doing here?’ They don’t really talk to me. Or to each other. The owner of Carnegie’s, I forget his name, but he thinks his shit doesn’t stink. Big guy.”

Not Wise Sons co-owner Leo Beckerman. The skinny 28-year-old, with a permanent smile and waist-length dreadlocks, was slinging still-warm bialys smeared with house-made chive cream cheese and lox. Waiting in line were heavily made-up ladies who trekked in from Palo Alto; pregnant women debating whether, wild or not, it’s OK to eat smoked salmon, and the requisite kvetchers. (“How can you call Saul’s a Jewish deli, when they don’t even have salami!”) East Coast transplants, too. “I’m from New Jersey,” confessed an Asian man who came straight from work. “Gimme a good bialy.” Another proudly pointed to his “Yonah Shimmel” hat. “How ’bout a knish?”

“The Deli Summit is the place to be tonight,” said a freckly redhead. “I think Obama might show up.”

A hot ticket, yes, but not an instant sell-out as in 2010, when Saul’s hosted a Referendum on the Jewish Deli Menu. “We had star power then,” explained Karen Adelman. “Michael Pollan. He’s a regular.” This year, they tried for Ruth Reichl. “She really wanted to do it! Mark Bittman was interested, too …”

Before show time, the speakers assembled in the back office to discuss what to discuss. “Bacon?” someone proposed. “Ooh, don’t go there …” warned Noah. “The Tablet ripped on us!” “I could tell my favorite joke,” proposed Ken. “What’s the biggest Jewish dilemma? Half-price sale on pork.” “Butter versus shmaltz?” someone suggested. “Oo, yeah, Shmaltz! Good one,” said Wise Sons’ Evan Bloom.

This was no G8 Summit of suits. The line-up on the small stage looked more like a student council meeting at a Yeshiva day school. Ken, the graying grandpa of the group, wore a black T-shirt emblazoned with Body by Pastrami. (Note: This was before he lost the 40 pounds.)

Third-choice moderator Joan Nathan, the prolific Jewish cookbook author with a perfectly coiffed pouf and an encyclopedic knowledge of kugel, kicked things off. “Tell us your pastrami conundrums.” Noah detailed his intricate sourcing and smoking process. “People don’t understand why I sometimes run out of meat. I can’t just call up Donny over at the plant and order more.” “At least you’re not dealing with a population that’s 75 percent vegan!” said Ken, from Portland. “We do a veggie Reuben,” offered Evan. Cheers and applause erupted from the Berkeley audience.

Sephardic cuisine, shrinking menus, pastrami portions were all fair game, but it was the topic of complimentary pickles that really got people fired up. “I don’t give pickles, or anything, away,” declared Noah. “Unless you’re a policeman. People come in asking, ‘Where’s my free slice of pastrami like I get at Katz’s?’ I tell them, ‘inside your sandwich.’ ”

“Nostalgia is something we all deal with,” continued Noah. “I have 85-year-old ladies telling me my chicken soup isn’t as good as their grandmother’s,” griped Ken. “Sorry, but your grandma has been dead for 40 years! How do you even remember?”

“You guys are just lucky not to be in New York,” Noah went on. “I’m still battling the 120-year-old meat temples. The idea of the ‘New York Deli’ is a joke.”

People, some in faded Levis and Birkenstocks with socks, listened intently, cupping their faces and furiously scrawling questions on note cards. None of you are kosher. How can you call yourself a Jewish deli when your food is off-limits to a large number of Jews? “What, like 12 people?” scoffed Ken. “Portland isn’t exactly West Jerusalem.”

“Basically, it’s just cool to be Jewish again,” concluded Evan. Hoots, hollers, and then folks filed out. Most beaming. Others were disappointed. “Too much talk about meat,” said a woman sporting a “Bubala’s Rugelach” T-shirt in an attempt to pimp her new start-up. An orthodox man was blatantly offended. “That one from New York, he’s a self-hating Jew.”

At an invite-only after-party at Saul’s, the panelists clinked glasses of Côte Du Rhône and passed platters of potato latkes and bowls of rhubarb-and-carrot tsimmis. “We all have different philosophies of pastrami-ama,” said Karen, “but for deli’s survival, it’s important that we stick together.” Every member of the New Guard agreed.

Now, a year later, with gefilte fish trending on par with foie gras, the New Guard is indeed getting together again. This time it’s happening in Manhattan, at the City Grit, where Noah invited his West Coast deli friends to collaborate with him on a $200, nine-course Shabbat dinner on Oct. 12, as part of the Food Network’s New York City Wine & Food Festival, to be followed by a still-unnamed second Deli Summit on Oct. 13, moderated, this time, by David Sax. “I keep coming up with all these pretentious names,” says Noah, “like, ‘The Symposium on the Future of Jewish Food’ or whatever. But maybe it’ll just be ‘Deli Summit II.”

“It’s only 65 percent sold-out right now, but I’m not worried,” he adds, sounding slightly worried. “They wanted to pair me up with a Food Network chef—Michelle Bernstein from Miami,” Noah scoffs. “She does Spanish food?! It was, like, Yeah, yeah, they’re Jewish, stick them together …”

But with his new book out, especially, “I feel this unique responsibility,” says the 30-year-old cook who—unlike Ken—has admittedly packed on a few pounds since leaving law school to, unintentionally, carry a torch. “Together, we, you know, kind of represent the future of Jewish food.” So he dissed the celebrity chefs to stick with his peeps.

“It’s going to be a good reunion.”