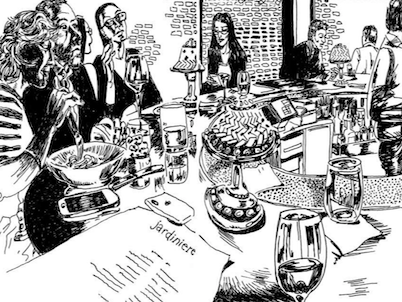 The Usual: Table 93 at Jardiniere

Jardiniere may have been the city’s preeminent pre-theater spot these past 21-plus years, but Fred and Terely Harrell never went for the 5 o’clock prix fixe — they went for each other.

Their first supper, of some 250, was back when their youngest of four kids was still in diapers. They didn’t take their kids, of course. Jardiniere, with its white linen and lush lighting, wasn’t that kind of place — which, of course, is why they picked it. “It felt like a date,” says Fred, senior pastor of progressive City Church.

Initially, the Harrells bounced around Hayes Valley’s two-tiered castle of modern French-California cuisine. They’d sit knee-to-knee and split a burger, or across from each other at a tad-drafty two-top, sharing the short ribs and a warm bread salad. Until one night, they were led up the carpeted stairs to Table 93, to a quiet booth in the back — and basically never left.

Well, except when Table 93 was occupied by other beloved regulars, like, say, Vija Hovgard: an 80-something, Bentley-driving ballet-lover who’s been coming for her Chopin on the rocks, and Jardiniere’s flawless service, since the start.

Jardiniere has a lot of regulars. Like opera singer Sara Colburn, who met her now-husband there 15 years ago one late night after rehearsal. And neighborhood hair salon owner Gene Hayes, who used to bartend down the block at the Ivy before it was Absinthe, and would come once a week for the warm bread salad and his “Genie Martini.” And symphony season ticket holders and wine industry-types and a disproportionate number of aging socialites. (For years, Denise Hale, in her sparkling chokers, was as much a fixture at the black marble, horseshoe bar as the Tiffany-style lamps lining it.)

Like all well-tuned fine-dining restaurants, Jardiniere’s staff knows its best guests: their drinks, their dishes, the proper pronunciation of their names (“Te-rel-ee,” they practiced). They know their likes and dislikes, their birthdays, their children’s birthdays — which were the only times, really, the Harrells would invite their brood. “Are you kidding?” laughs Fred. “We couldn’t afford to take teenagers to Jardiniere! They’d outeat us three times over!”

On Terely’s birthday, they’d amend the menu to read “Terely’s Quail,” because they knew it was her favorite. And on nights they knew the Harrells were coming in, but Fred’s short rib wasn’t, they’d be sure to have one on hand, just in case he wanted it. Which he always did. Sans the pomme puree, please. “I told them: ‘It just doesn’t work,’” Fred explained. “The potatoes turn too soupy.” Chef Traci Des Jardins later took it off the menu and started serving the short ribs with another setup. (“I don’t know, maybe it was because of me,” Fred ponders.) 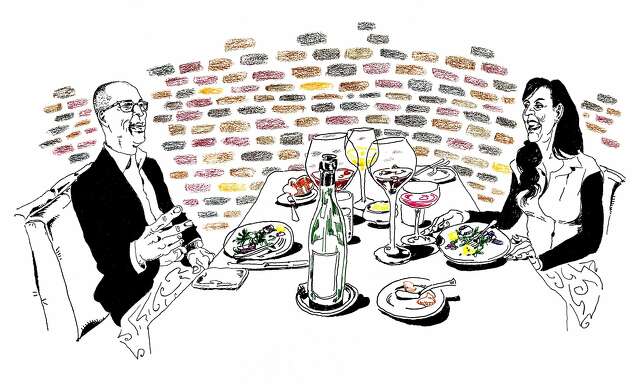 Another thing the staff did on nights they knew the Harrells were coming in: cheer. Actual hoots and hollers during the pre-service meeting. Their son, Lucas, told them so.

Now in his 20s, inspired by his infrequent special-occasion meals, he’s grown up to be a chef, working the line at restaurants like Petit Crenn and Coi, where he fell for a co-worker a few years his senior: a former pastry chef at Jardiniere. She definitely made desserts devoured by her future boyfriend. And it’s likely she made the two dozen mini-macarons that Terely, a Cuban-born flan maker, once begged the kitchen to make her as toppers for a last-minute order for her catering company called What the Flan! “Yes,” says Terely. “The answer at Jardiniere is always ‘Yes.’”

One night over post-work cocktails at a bar full of San Francisco cooks, Lucas met a guy from Jardiniere, and another connection was made. “Whaaat? Your parents are the Harrells!?” the guy exclaimed, like they were real celebrities, not just in-house ones. “We love the Harrells.”

It’s a true love, and a mutual one. A rarity in the often fleeting, superficial exchanges between those who serve and those who sit. At some point, for the Harrells, hellos became hugs and “see you next times!” became “lets meet for lunch” (and discuss your boyfriend troubles and decorate your house and swap hairdressers). And once in a while, an otherwise not-inexpensive bill became a big fat $0. Like the time after Fred led a memorial for the homeless, and manager Mario dropped by and said, “Thank you. This one’s on us.”

Only once did the pastor walk in to the restaurant with his clerical collar still on, following a Black Lives Matter march — looking the part he already played. “I’ve always felt like the chaplain of Jardiniere,” he says. Talking. Listening. Welcoming staffers who’ve long felt unaccepted by the church, into his. Some for the first time, and often on Easter for the annual Sunday service he holds at Davies Symphony Hall. “I’ll look out at the crowd and see our server — our favorite human on the planet — sitting with Terely …”

He trails off and Terely picks up: “We know how much courage it takes him to be there,” she says through tears.

Fred finds commonality between City Church and what he considers his other church, between Jardiniere’s hospitality and his philosophy as a pastor. “Both are about community and congregation, about creating a space where people feel welcome and cared for.” As the Harrells, and so many, have.

Two decades later, Fred and Terely are empty nesters; their kids are gone, and now so is their restaurant. “Nothing will replace it,” he says. Although, of course, something will.

“Jardiniere has been our place to talk, to be together,” he says. “A place important to our marriage — our literal investment in it.”

Upon hearing about Jardiniere’s Saturday, April 27, closure, a lot of people made one more reservation. The Harrells made a rash of them. Their last suppers.

The other night, sipping their go-to twin martinis (Old Raj, served up, with a twist, and four olives on the side), they surveyed the menu. “Hmm. They brought back the pomme puree,” Fred notices — and orders his short ribs with it. Just because.